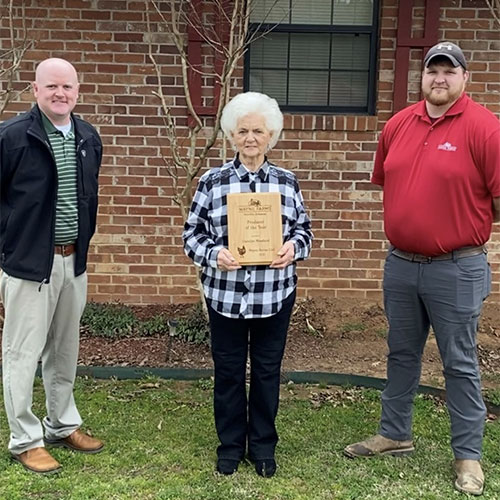 DANVILLE, AR. (March 2021) – Poultry farmers in Yell County and the surrounding region need look no further than 2020 Wayne Farms Producer of the Year Carolyn Woodard if they need a lesson in growing chickens the right way. For the fourth year—and third consecutive year—Woodard Farms has been named recipient of the prestigious award.

And while her farm may be in the running for future award recognition, this year’s accolade is a bittersweet one for Woodard. She recently announced her retirement from day-to-day poultry farming, with plans to turn over the reins to son Mike and his wife Sharlene, who already help her with day-to-day operations.

Although equipment and technology have changed over the years, Woodard’s formula for winning results haven’t varied much. “Get up early and make your rounds. You’ve got to spend time in the house to keep them healthy and disease free,” advised Woodard. “Make the chickens the first and last thing on your list everyday—take care of them and they’ll take care of you,” she continued. Chickens have taken pretty good care of Woodard and her family over her five decades of growing poultry for Wayne Farms. First she worked for Wayne Farms for 15 years while husband Tob Woodard ran the family farm, then she continued running the operation with Mike and Sharlene after Tob’s passing in 2002. Over the years, Woodard’s farm has been a model for success in all the areas that count, with her birds achieving significant leads in yield, feed conversion, bird weight, house air quality and liveability. And even though her house isn’t as technologically-advanced as newer farms, her tried and true methods perform year after year, leading to results worthy of quadruple Producer of the Year Awards.

Wayne Farms officials are quick to point out the simple and effective strategy Woodard uses to get such results—hard work and relentless attention to detail. Her reputation over 50 years as one of the hardest working growers in the poultry business is well-earned, said Wayne Farms Live Operations Manager Travis Frick. “She’s a solid poultry farmer—and she’s been at the top of the page for years. I wish we had 100 more just like her,” said Frick. “I guarantee you at least 8 hours a day, she’s in there making sure things are right. We’re going to miss her.” Woodard’s Wayne Farms Field Representative Rowdy Douillard agreed. “She’s trained many a field rep,” joked Douillard, describing Woodard’s attention to detail. “She’s consistent—she does things the right way every single time,” noted Douillard. “Whatever’s going on with those birds, she’s on top of it, I don’t care if it’s 2 am.”

Both Frick and Douillard noted the announcement of Woodard’s pending retirement with mixed emotion given her long history—more than four decades—of association with Wayne Farms. Both are also thankful that even though she wouldn’t be around as a grower going forward, the Wayne Farms live production team would still be welcome at Woodard Farms to enjoy one of her famous lunch spreads.

With retirement beckoning, Woodard isn’t sure what comes next on her bucket list, but she’s positive it doesn’t involve raising chickens. At nearly 77 years old, she’s just “tickled to death to be done,” Woodard offered. Regarding specific retirement plans, Woodard said she hasn’t planned anything special. “I haven’t had time. My life has revolved around chickens so long I’m just looking forward to relaxing, traveling and doing the things I haven’t had time to do.” Woodard had intended to retire earlier this year, but a call from Wayne Farms broiler manager Kyle Klober put that on hold. A local farmer with personal health problems couldn’t finish his grow out so the opportunity was offered to Woodard Farms. “We took them at 18 days,” Woodard recalled. “By the time they were finished these chickens averaged 10.29 pounds—I was just plumb give-out and I told my son it’s time for me to retire,” mused Woodard. But retirement is relative, and that doesn’t mean Woodard’s lifestyle will become idle by any means. With several new pair of cowboy boots and her 87 year old boyfriend beside her, she has plans to roam Arkansas and points beyond. “We always go to Mountain View to dance and listen to music. Maybe we’ll head up to Branson,” Woodard laughed.

Woodard Farms is owned and operated by Carolyn Woodard, her son Mike and his wife Sharlene. A Wayne Farms producer since the 1970s, Woodard Farms broiler operation was selected as Producer of the Year based on a variety of factors—bird health and weights, feed conversion, house liveability and air quality. Ms. Woodard’s relationship with the poultry industry runs deep—she ran the family farm with her husband, Bill “Tob” Woodard for many years while also working in Quality Assurance for Wayne Farms for 15 years in the Danville Processing Facility. When Mr. Woodard passed away in 2002, Ms. Woodard left Wayne Farms as an employee to become a full-time Wayne Farms grower.